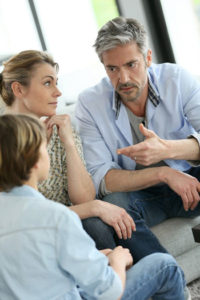 Right from the moment you discover this fact, right out of the gate, there are different approaches you can take. I have seen parents go all the way from minimization of the event to becoming petty dictators. Neither extremes work well because they miss the ambiguity of the problem. Your most important task as a parent in that situation is to protect your teen while teaching them social problem solving skills that will help them navigate the unchartered waters of adulthood. So a middle road between discipline and nurturing offers the best possibilities of turning this scary event into a golden opportunity to strengthen your relationship with your teen.

First, educate your teen in a matter of fact way to the dangers he/she faces with the use of pot. Then emphasize that your most important task is to keep him/her safe so big potholes on the road of pot usage are avoided at all costs. Third, convey that you understand that their friends are doing it, that your most important task is to help them make smart choices while keeping them safe. Seek to have them think about the consequences, both good and bad, that the leaving of a pipe for pot smoking in a car exposes them to.

Here is a dialogue that a father had with a 16 year old who was driving with a pipe in his car. This father had chosen the pragmatic approach to the problem at hand. He also decided that he would not shy away from imposing consequences either. He told his son:

“I care so much about you that I want you safe. I want you to make good decisions and to think through the consequences of smoking. There are medical reasons why someone your age needs to stay away from pot and alcohol because your brain is still developing and pot stays in the fatty tissue of your brain for three months! Second, never, ever hesitate to call me or your mom if you find yourself in a situation where pot or alcohol are involved and you are uncomfortable with.   Now I am going to go over some absolute rules that if implemented will keep you safe and will make you think about the consequences relative to the environment in which you choose to do it.

Second, safety first which means never leave a pipe or any illegal substance in the car, i.e. no alcohol bottles, no containers of any sort with pot because legally it can be construed that you are dealing whereas if someone has a rolled joint it is construed to be personal use. Driving and substances don’t mix because the legal consequences are overwhelming.

Third, no driving ever when smoking or drinking. Period, never.

Fourth, never pressure anyone to try drinking or smoking

Fifth, never do it around your little sister

Sixth, never do it around school where you will jeopardize your future by being kicked out.”

The teen received consequences of no driving for 6 weeks and a community service commitment for 3 weekends. The father then started communicating with his son around his motives for smoking. The teen opened up and understood that to be safe was the most desired outcome. The teen followed the rules religiously, he never openly discussed his use with his father again but he often chose to have his friends come to his house rather than in other unsafe environments. His father always agreed to his son’s friends coming over, always insisted on the friends spending the night once here and kept being open and available to his son. His son navigated those murky waters without a hitch ever again.

Another father chose the nazi approach to the same situation. He got very angry with his son, he yelled and grilled him as to how and when he had started his use of pot. He threatened to report the son’s friend who had given him the pipe to the police. He never sought any understanding of what made his son turn to pot. He expressed disgust and indignation at his son’s choices. Consequently, just like in World War II, his son’s resistance to this approach went underground. He was given the same restrictions that the other father gave but these consequences only festered a greater compulsive desire to escape because he never was trusted to make judicious choices. The ‘infection of pot use’’ became more insidious than ever with the son making poor decision after poor decision culminating in heroin use and a true substance abuse nightmare.

So I tell parents that face this problem to have both a bad cop/good cop team approach to the problem. I instruct them to switch roles (even when divorced) and to keep the dialogue and curiosity open while enforcing real consequences. A mother in my practice took this “tough love” approach with her 15 y.o. daughter. And she learned to engage with her daughter while teaching her daughter to trust her again.  She also gave her daughter tough consequences when she did not chose appropriate modes of behavior.  That trust, at the right time, with both of them engaging in real communication through joint therapy, was profoundly more effective than any mistrust that would have ensued from an authoritarian approach alone.

In my clinical experience, I have seen the balance between toughness and love win out time and again. A teen’s most critical developmental task at this age is to develop appropriate problem-solving skills in response to environmental challenges

A tough love approach that is realistic fosters the appropriate social problem solving capacities in teens while leaving the door open for help when truly needed. Mastering such ambiguous choices is a teen’s most challenging task which when completed will leave the teen with lessons that will last a lifetime.

Hollywood and the Dance of False Intimacy