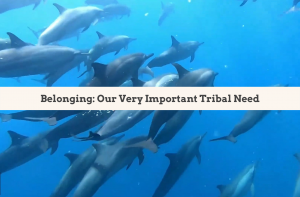 Oprah’s new series “The Me You Don’t See” is an enormously well-crafted and deeply moving series.  In that series, Oprah focuses her most amazing gifts on our mental health needs as humans.  And the shining truth that emerged for me in her beautiful work is that we need each other as humans so we can relate our struggles and our triumphs with and to.  The series is deeply moving.  I felt deep resonance in my heart as it witnesses real humans heal from grief and trauma.  Every time I have watched it, a deep sense of love and connection bubbled up in my heart as I heard many humans telling their truth, their experience, their strength and their hope with other humans.  The series harnesses the power of storytelling by familiar celebrities and real humans alike as they open into vulnerability and ‘realness’ about their suffering.  And we as spectators get to witness their triumph of transforming suffering by the power of compassion between and with other humans.  The most impactful moment for me came when a clinical psychologist and researcher at the Imperial College of London spoke of the most powerful tool of healing that the research revealed was in the healing felt in connection in group work.

In my own healing journey from PTSD, a journey I was lucky enough to start in my twenties, group therapy emerged as the most memorable experience where I “regrew” my damaged self into wholeness with the love and intimacy of members of my group.  Group therapy, as a therapeutic modality, has shown to be remarkably profound in promoting oxytocin and wellbeing in our bodies, hearts and minds.  It has been proposed that the reason it promotes such deep transformative healing is that group therapy, mimics the original tribal configuration of family pods where two or three generations live and relate to one another in close proximity for a lifetime.  And the best configuration for group therapy is 8 to 10 members.  Below and beyond that number, efficacy of group therapy decreases presumably because it does not mimic that deep belonging need of the tribal pod.

Mary Ainsworth, the Canadian researcher who shared her in-vivo experiences of living in the midst of a tribal village in Uganda in the 1960s, outlined how such close proximity to the tribe promoted secure attachment in the young children that she observed.  The popular phrase, “It takes a village to raise a child”, beautifully illustrates that it takes a pod of humans, not just the modern atomic family (mom, dad and kids), to grow a child well.  In other words, we need other humans outside of our immediate atomic family to support us in growing humans well.  We need “tribal” pods in our deeply isolating modern social world, a fact poignantly revealed by the Covid-19 pandemic.  As John Bowlby presumed, psychological research has now established that we are wired to attach profoundly with other humans as we travel through the ups and downs of life on this beautiful planet.

humans, are profoundly mammalian…  Mammals all move through life in pods. Dolphins, whales, chimpanzees, gorillas are some of the best researched species that epitomize this social tribe/pod phenomenon the best.  And these species have very distinct patterns that they develop to teach their young to belong to the pod.  Exclusion from the pod is an excruciating punishment to a mammal, be it a chimpanzee, a whale or a human.  Exclusion from a tribally configured pod, such a single mom raising kids by herself, often creates trauma in humans.

Oprah’s series follows different humans who, for some reason or another, all experience the crushing trauma of being severed from a pod, either physically or psychologically.  In the case of Prince Harry, the numbing isolation of his silent, inward grief at the harrowing repercussions of his mother’s death in the royal family “tribe” of Britain was a crushing reality that he needed to confront in order to protect the woman he loved and cherished.  In Oprah’s case, a severed bond with her mother who failed to protect her growing up, is a more overt trauma that deeply impacts a human.  Thank God, she had a teacher that saw the child Oprah for who she was, a profoundly good and brilliant human.  One human who witnesses the true value of a child, even without a biological bond, creates resiliency in that child through the power of compassion and care.  In all the courageous people, Glen Close, Lady Gaga (the celebrities) who came forward in this series to show how they transformed their trauma, all of them opened up about the transformative power of bonding in a human pod.

Today, the modality of group therapy is the tool that I most cherish in my panoply of tools to “regrow” and “transform” adult humans.  The bonding experience of group therapy is truly transformative slowly filling the needs at the deepest core of our human experience.  Group therapy is our best modern version of tribal belonging and harnessing its healing power.  Belonging to a pod that accepts and supports “The Me You Cannot See” eloquently speaks to our capacity as humans to transform grief, trauma, loneliness or the simple absence of feelings.  So many of these experiences mark us at a deep level when we are a child, and the marking leaves a legacy of trauma that we need to transform to emerge whole again.  As Prince Harry said: “What trauma you carry that you do not transform, you transmit”.  Hearing that statement from him (one he clearly learned from therapy) moved me to tears.  It resonated the truth I have witnessed so often in people who do not do emotional and therapeutic work to transform the legacy of their upbringing.  I filled me with joy to see the work I do every day offer such hope to the brave souls in the series and  in the clients I have the honor and privilege to help.

Allowing a group of humans to hear and witness our scars in a safe environment is the most simple and transformative power of the group.  That experience fosters the production of oxytocin to grow in our bodies, hearts and minds and then, magic, belonging takes place… I have personally been humbled by the power of group therapy during the pandemic via teletherapy.  While teletherapy is a second best to in person group therapy, nevertheless the power of oxytocin takes place by the exercise of one’s voice with witnesses in a safely guided modality of group on the screen!  Because the voice and the sharing of one’s voice is the most grounding experience that supports the production of oxytocin and is a powerful second best to in person group gatherings.  I look forward to a return of group therapy in person while continuing on the screen as this pandemic becomes a bad dream of the past. 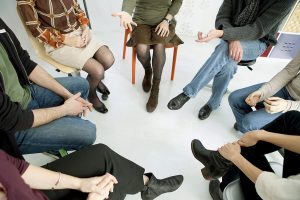